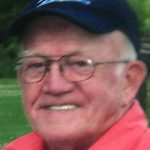 Alfred L. Konzman, 86, of Uniondale died Monday at home.  His wife of 63 years is the former Loretta Zrubek.

Born in Dickson City and raised in Forest City, he was the son of the late Alfred Sr. & Mary Buck Konzman. He was a 1949 graduate of Forest City High School.   Alfred served in the Air Force during the Korean War and then  for 24 years in the Pennsylvania Army National Guard where he retired as a Master Sergeant in recruiting division. He was a member of St. Michael’s Church/ St. Rose Parish, Simpson

He was an avid bowler and golfer and a member of Panorama Golf Course where he had a hole in one.  Al also enjoyed bingo and gardening.  He was a loving husband, father, grandfather who will be missed.

The family would like to thank the staff of Creekside Health & Rehabilitation Center for their care and support during his stay there.

He was preceded in death by a daughter Karen, a sister, Velma and a brother, Ludwig.

The funeral will be Saturday from the Joseph W Scotchlas Funeral Home, Inc 621 Main St, Simpson with Mass of Christian Burial at 9:30 AM in St. Michael’s Church, 46 Midland St, Simpson. Friends attending the mass are asked to proceed directly to church. Interment in St.. Michael’s Cemetery.   Friends may call Friday from 4 to 8 Pm.