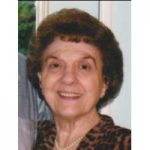 Anna Neutts Marshalek, of Reservoir St., Simpson died Sunday at Regional Hospital of Scranton. She was the widow of Joseph B. Marshalek, who died on March 6, 2005. The couple had been married for 49 years at his passing.
Born in Carbondale, in 1932, she was the daughter of the late Anthony and Katie Tolerico Neutts. She was a 1950 graduate of Benjamin Franklin High School, Carbondale. Before her retirement Ann worked in a clothing manufacturing factory.
She was a member of St. Michael’s Church, Simpson/ St. Rose Parish. She was a former member of the Fell P.T.A. and the Confraternity of Christian Mothers and Guild of St. Michael’s Church.
Ann had been an active member of Cub Scout Pack #17 and Boy Scout Troop #312, Simpson, since 1970. She served as a Den Leader, Den Leader Coach, Assistant Cub Master and committee member of Troop #312. She had received the Den Leader’s and Den Leader’s Coach awards, St. Anne’s and St. George religious awards from the Scranton Diocese for her work with Scouts. Ann also received the Award of Merit, the second highest award given to adult volunteers.
She is survived by a son Joseph, Jessup, a sister Geraldine Defazio, Clifford and three brothers Frank & Nicholas Neutts, Carbondale and Anthony Neutts and wife Clara, Syracuse, NY. A brother –in-law, Stanley Dzwonczyk, several nieces, nephews, great nieces and nephews..
Ann was preceded in death by an infant son, nine sisters Elizabeth Dzwonczyk, Catherine Cerra, Lenore Talerico, Pauline Cadora, Marie Favaloro, Margaret Parente, Angela Vena, Julie Ross, Antoinette(Dolly) Perri and a brother Milo Neutts.
The funeral will be Wednesday from the Joseph W Scotchlas Funeral Home,Inc 621 Main St., Simpson with Mass of Christian Burial at 9:30 Am in St. Michael’s Church, 46 Midland St, Simpson. Entombment at Our Mother of Sorrows Cemetery, Finch Hill.
Friends may call Tuesday from 4 to 7 PM. For directions or condolences visit: www.scotchlasfuneralhome.com