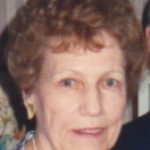 Bernadine “Betty” Bernarsky, 96, formerly of Simpson died Friday at the Forest City Nursing Home, Forest City. She was the widow of Michael Bernarsky who died in November 2014. They were high school sweethearts and had been married for 72 years at the time of his passing. Theirs was a loving marriage.

Born in Langeloth, PA on January 26, 1922, daughter of the late John and Anna Kovaleski Rulis, she was a graduate of Fell High School, Simpson. She was employed in various dress factories in the Carbondale area.

Betty was a member of SS. Peter & Paul Greek Catholic Church, Simpson and the St. Ann’s Sodality. She was devoted to her husband and family, especially her grandchildren. She was her happiest surrounded by family preparing holiday meals. Betty and Mike enjoyed traveling by car throughout the country.

The family is grateful for the care Betty received at Oakwood Terrace, Moosic, Forest City nursing Home and from Dr. Frank Moro.

Betty was the oldest and last of her siblings, Marcella, Ruth, Rosemary and Donald who preceded her in death.

The funeral will be Tuesday with Divine Liturgy at 10:00 AM in SS. Peter & Paul Greek Catholic Church, 43 Rittenhouse St., Simpson by the Rev. Myron Myronyuk, Pastor. Interment will be in Our Mother of Sorrows Cemetery, Greenfield Township. The family will receive friends at the church from 9:00 Am until service time.

In lieu of flowers, memorial contributions may be made to SS Peter & Paul Greek Catholic Church, P.O. Box 124, Carbondale, PA 18407