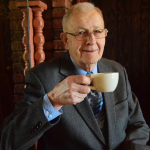 Born in the tiny coal town of Simpson, Pennsylvania, Dennis would recollect, “we didn’t know any different; everyone was poor.” Since his high school burned down, his typical day was half a day of school; the rest was spent shoveling coal and making deliveries with his father. He had a choice to move out, and he went to BCC and began a 40-year career with Link Flight Simulation. He was drafted in the US Army and spent two years in Germany.

Upon his return, he married Pauline (Chupeck.) Their 60 year marriage, produced two sons, daughters in law, grandchildren, and great-grandchildren and roots in the Binghamton community with the Chenango Bridge Fire Company, Dormition of the Virgin Mary Orthodox Church, and First Ward Action Council. He always mentioned that his life surpassed what he imagined when he was a small child.

Viewing is Friday, September 27 from 8:30 – 10 am at the Dormition of the Virgin Mary Orthodox Church (53 Baxter Street) followed by Funeral service at 10 am. Burial at 2 pm at St Tikhon’s Cemetary in  South Canaan, PA.

A special thanks to Fr Ilya, Dr. Dzwonczyk, nurses, Hospice, and other caregivers in his journey. Kindly consider gifts to Mercy House.

He came from a tiny coal town, saw bits of the world, and he lived. He didn’t’ talk about it. He did it.