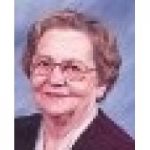 Dolores Danchak Krisa, 83, of Alexandria, VA died Saturday at home. She was the widow of Walter Krisa, who died in 1998.
Born in Simpson on June 27, 1930, she was the daughter of the late Walter “Deemer” & Mary Strosky Danchak. She was a graduate of Fell High School, Simpson in 1948 and after completing business school began working for the CIA in 1949. She married Walter in 1952, and served as a secretary, in most of his foreign assignments. Domestically she was promoted to administrative assistant before retiring in 1987 upon which she was awarded the Bronze Medal for Intelligence.
She was a lifetime member of St. Nicholas Orthodox Cathedral, Washington D.C. For many years she was a dedicated volunteer with the Inova Fairfax Hospital Auxiliary. She was a generous patron of many local and national charities and was very often a personal caregiver to a friend or family member in need of a helping hand.
She is survived by three children, Stephen Krisa, Round Hill, VA; Keith Krisan, Cambridge, MA; Claudia Krisa Snow, Waikoloa, HI; three grandchildren, Nicholas, Evan and James Walter; a sister in law, Anne Danchak, Wilmington, NC; a goddaughter, Cynthia Mancini Butler, Franklin, TN; nieces and nephews.
She was preceded in death by a brother, Bud.
The funeral will be Friday, January 24th with a Requiem Service at 9:00 AM in St. Michael’s Russian Orthodox Church, Walnut St, Jermyn by the Very Rev. Archpriest John Kowalczyk. Interment in St. Tikhon’s Cemetery, South Canaan. Friends may call Thursday from 5 to 8 PM at the church. Parastas at 8:00 Pm.
Arrangements by the Joseph W Scotchlas Funeral Home, Inc., Simpson.
In lieu of flowers donations may be made to Mrs. Krisa’s hospice service: Capital Caring Resource Development Department, 2900 Telestar Court, Falls Church, VA 22042
For condolences visit: www.scotchlasfuneralhome.com