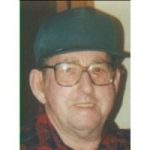 Donald E. Beattie, 76, of Carbondale died Sunday, April 20th at home. His wife, the former Maria Clark died in 2003.
He was born in Vermont and had been employed as a truck driver.
He is survived by four sons, Ronald & Robert Wanamaker; John & Jose’ Clark and a daughter Rhonda Caracapper, several grandchildren and a brother Kenneth . A graveside service will be held on Wednesday, May 7th at 12:30 PM in St Joseph’s Cemetery, Forest City. Oliver Shifler & Scotchlas Funeral Home, Inc. Carbondale.