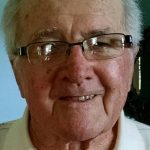 Born in Forest City, he was the son of the late William and Bridget Kearney Fives. He was a 1940 graduate of Forest City High School. Upon graduation, Donald volunteered for the CCC’s (Civilian Conservation Corps) and in 1942 enlisted in the US Navy to defend our country in WWII. He served on the USS George M. Cohan Liberty Ship as a radio operator.

After discharge in 1945 he moved to Kearny, NJ then to Manville, NJ. He worked for Otis Elevator, National Lock Washer and Universal Flavors. Upon retirement he and Rosalie moved back to Vandling.

He had a special place in his heart for his grandchildren and would spoil them any chance he could.

Donald is survived by his son William and his wife Tammy, Scott Twp.; grandchildren Chad, Shelby and Skylar; great-grandchild Chloe; and nieces and nephews.

Donald was preceded in death by his five brothers and one sister, Joseph, Mary Fives Cardamon, Charles, William, Norbert and Raymond.

The funeral will be Tuesday with Mass of Christian Burial at 10am in St. Joseph’s Church, 741 Delaware St., Forest City. Viewing, Monday 4-7pm, and Tuesday 9:00 AM to 9:30 AM at the Joseph W Scotchlas Funeral Home, Inc. 621 Main St., Simpson. Entombment with military honors will be in St. Tikhon’s Mausoleum, South Canaan. Donations can be made to Ascension Parish, 621 Hudson St.,  Forest City, PA 18421,  in Donald’s name.