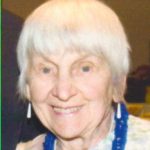 Dorothy Veronica Notchick, 96, a lifelong resident of Simpson, died Friday at the home of her niece, Dorothy Tornvall, Carbondale.

Born in Simpson, she was the daughter of the late John and Dorothy Dubill Notchick. She was a graduate of Fell High School, 1941 and was employed as a supervisor in Gentex Corp. Dorothy then attended St Joseph’s School of Nursing and graduated in 1973.  She was employed as a registered nurse at St. Joseph’s Hospital, Carbondale until her retirement.

Dorothy enjoyed various hand crafts, working in her flower garden and at Monkey Run Park , bird watching and spending time with family.  She was a devoted sister and aunt.

Dorothy is survived by a brother, Andrew Notchick and fiancee’ Cherilyn Apostolico, Waymart , her niece Dorothy and husband Arnold Tornvall, with whom she resided and was her care giver, a special nephew, John Notchick and additional nieces and nephews.

The funeral will be Tuesday with Mass of Christian Burial at 11:00 am in St. Michael’s Church, 46 Midland St., Simpson, by the Rev. Joseph S. Sitko.   Interment will be in Holy Trinity Cemetery, Simpson. Friends may call at the church from 10 am until mass time. Masks are required and social distancing rules will be followed.