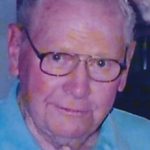 Edward D. Arthur, 94, of Carbondale and formerly of Simpson died
Monday at the Riverside Nursing & Rehabilitation Center, Taylor. He was predeceased by two wives, Monica Kresock and Catherine Galati.

Born in Whites Crossing, he was the son of the late Samuel and Anna Latka Arthur. Edward was a graduate of Fell High School, Simpson and then served during WWII in the Army. He was then drafted by the Lamesa Lobos, a Texas minor league baseball team as a pitcher. Ed also played for the Odessa Oilers and Plainview Ponies of Texas before returning to Simpson. He was employed by the Farview State Hospital, Waymart until retirement.

The funeral will be Friday at 9:30 AM in St. Michael’s Church, 46 Midland St, Simpson. Interment will follow in Holy Trinity Cemetery, Simpson. The family will receive friends at the church Friday from 8:45 AM until mass time.