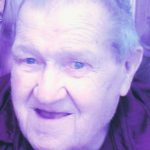 Edward Wisniewski, 96, of Waymart died Friday at Wayne Woodlands Manor, Waymart. His wife, the former, Margaret Bellas , died in 2017.
Born in Simpson, he was the son the late William and Magdalen Petyk Wisniewski. He attended Fell Township Schools and moved to New Jersey shortly after. Edward served in the Army during both WW II and the Korean War. He retired from Okenite Rubber Co., Passaic, NJ.

Edward was an avid fisherman and especially enjoyed his trips to Canada. He was a member of the Paciga VFW Post, Simpson.

He was preceded in death by a brother, Stanley “ Sonny”, four sisters, Helen, Stella, Jean and Josephine.

A Private family visitation will be held at the Joseph W. Scotchlas Funeral Home, Inc. 621 Main St., Simpson. Interment will follow at Our Mother of Sorrows Cemetery, Finch Hill.