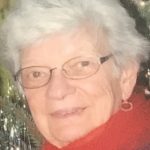 Frances M. Potter, 95, of Waymart died Monday at Wayne Memorial Hospital, Honesdale. She was the widow of John W. Potter, who died in 2002.

Born in Endicott, N.Y., she was the daughter of the late John and Mary Vlasek Ciganek.

She was preceded in death by a son, Harvey Potter, four brothers, John, Paul, Frank and Anthony Ciganek and two sisters, Agnes Vavra and Mary Ciganek.

A graveside service will be held at the convenience of the family in Gelatt Cemetery, Gelatt, PA.