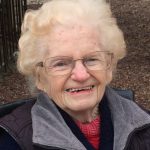 Helen Cavanagh died peacefully on May 8th at the age of 100. She was a resident of Forest City Nursing home.  She was preceded in death by her husband, 1st LT Joseph Cavanagh in 1945. Joseph died in action in World War II.    She was born in Forest City, a daughter of the late Alex and Anelia Shipshinski.

Helen loved going to church every day. She was an avid Yankees fan especially Derek Jeter. Helen also loved her Bingo.  Her very favorite thing was spending time with her family,  especially her grandchildren.

She is also survived by a brother Edward Shipshinski, Forest City and many nieces and nephews.

Helen was preceded in death by her sisters Helen Lynch and Stella Andria and brothers, Frank and Alex Shipshinski.

The family wishes to thank Dr. Allen Orehek and the staff of the Forest City Nursing home for their kind and loving care.

Mass of Christian burial will be at St Rose of Lima Church at a time to be determined. Internment will be with her husband at Long Island National Cemetery, Farmingdale, Long Island, NY.