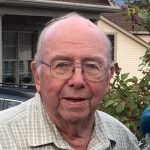 James Thomas Maholchic, 89, of Simpson died peacefully on Wednesday at Allied Services Nursing Center in Scranton. He will be joined with his wife, the former Mary Lou Kovalesky, who died in 2017.

Born in Carbondale and raised in Childs, Jim was the son of the late George and Clare Wasley Maholchic. Jim was a 1949 graduate of St. Rose High School and attended the University of Scranton. He served in the Air Force during the Korean War. Jim and Mary Lou moved to New Jersey after they were married in 1955 where they raised their family in Kearny and eventually in Fords. Jim owned and operated Economy Painting since the early 1970s. After retirement in 1995, he and Mary Lou returned to Pennsylvania to live in Simpson and spend summer days at Lake Como.

He was a member of St. Michael’s Church/St. Rose’s Parish, Carbondale. He also enjoyed being a member of the Knights of Columbus and the Veterans of Foreign Wars, Walter Paciga Post 4712 in Simpson.

Jim loved his family, his beloved wife Mary Lou, his friends, a good cigar while watching a thunderstorm, a fire at Lake Como, a Notre Dame football game, and his dogs Moose, Max and Marla. He was known for his green thumb where his garden was always beautiful and his tomato crop bountiful. Oh, how he loved his tomatoes!

Jim is survived by four children, Kathy and her husband Thaddeus Papciak of Hillsborough, NJ; Ellen Baglien of Anacortes, WA; David of Newfoundland, NJ; and Julie Lehoczky of Atlantic Highlands, NJ. Jim was preceded in death by his son, Thomas, in 2018. He will be missed by his brother Gerald and his wife Violet; his three grandchildren, Paige Werner, Brett Baglien and Charles Lehoczky; two great grandsons, Keegan and Wyatt Werner; sister-in-law Charlotte Rogero and many dear cousins, nieces and nephews. Jim was also preceded in death by his brothers, Eugene and William, and sister Mary Lou Hennigan.

Following cremation, a spring internment service will be held at Holy Trinity Cemetery, Simpson. A celebration of his life will be held this summer. Arrangements are by the Joseph W. Scotchlas Funeral Home, Inc., Simpson. For condolences, visit: www.scotchlasfuneralhome.com.