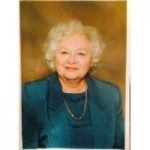 Janet M. Warden, 84, of Lady Lake, Florida died Thursday night at home. She was the widow of Eugene A. Warden, who died in 2006.
Janet was born in Simpson, on June 19, 1930 to the late John & Martha Kiehart Withka. She was a graduate of Fell High School, Simpson and the Jefferson School of Nursing in Philadelphia. As a young teenager she was a trumpet player in the Buddy Howe all girl Orchestra entertaining thousands of locals during WWII.
She is survived by four children and their spouses, Scott Warden, Diane & Lonnie Carugno, John and Christine Warden, Robert and Andrea Warden, seven grandchildren and one great grandchild.
She was preceded in death by a brother Walter Withka.
The funeral will be Saturday from the Joseph W Scotchlas Funeral Home, Inc 621 Main St., Simpson with Divine Liturgy at 9:30 Am in SS. Peter & Paul Greek Catholic Church, 43 Rittenhouse St, Simpson by the Rev. Myron Myronyuk, pastor. Interment in Our Mother of Sorrows Cemetery, Finch Hill. Friends may call Friday from 6 to 8 Pm.
In lieu of flowers, memorial contributions may be made to: T.J. Martell Foundation, 40 Worth Street, 10 th Floor, New York, NY 10013 newyork@tjmartell.org