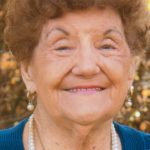 Jeanne K. Selinsky Wallace, 90, of Simpson, died Thursday, June 4, 2020, at the Carbondale Nursing Home after an illness. She was preceded in death by two husbands; Henry Laurich in 1957, and Edward S. Wallace in 2005.
Born in Forest City, she was the daughter of the late Stephen and Mary Tursic Selinsky. She was a graduate of Forest City High School.  For many years, she was a driver for the Northeastern Intermediate Unit 19.
Jeanne was an active member of St. Michael’s Church, now St. Rose Parish.  She was involved in many aspects of the church, including C.C.D  teacher, Parish Council and yearly Parish Picnic.   She was also a member of the former Christian Women’s Guild.  She was a devoted Catholic, praying daily, and had a special affection for the Blessed Mother. She looked forward to attending 4:00 PM Mass on Saturday and dinner afterward with her best friend, Mary Lisowski.  She was a Cub Scout Den Leader for many years and received many awards for her dedication.  She also was a champion fundraiser, and single-handedly raised several thousand dollars for a local family to assist with medical expenses.
Jeanne enjoyed the simple pleasures of picking blueberries and then giving away pies that she made.  If you were lucky enough to receive one of her pies or her banana cake, consider yourself special.  Mom prided herself in decorating her home, inside and out, for all Holidays, especially Christmas. Her home was once featured on Christmas Eve in the Scranton Times/Tribune.  Jeanne was also known to always be meticulously dressed; from her hair, to her outfits,  to her jewelry.
Her greatest treasure was the love she had for her children, grandchildren and great grandchildren.  She is survived by three children: Lt. Col (Ret) Thomas Wallace and wife, Angela, Lewis, DEL.; Kathryn Grande and husband, Anthony, Greenfield Twp.; and Michelle Kelsch and husband, Brian, Mountain Top.   She has seven grandchildren: Thomas and wife, Casey; Joseph and wife, Carolyn; Anthony and wife, Tara; Kyle, Ryan,  Zhachori and Schyler.   She also leaves cherished great-grandchildren: Kyleigh, Makenzie, Jack, Miles, and one great grandchild due in July. She is also survived by siblings: Margaret Slick, WA; Joseph Selinsky, AZ; Betty Danowski, OH; Bernadette Cooper, MA; Maryann Logar, Browndale; and Robert Selinsky, Olyphant; as well as several nieces and nephews.  She was preceded in death by three siblings: Paul, Dorothy, and Geraldine.
The family would like to thank everyone at the Carbondale Nursing and Rehab Center for caring so lovingly for Mom these last few months, especially Jenna.  Also, thank you to Allied Services Hospice, especially Barbara, for guiding Mom on her final journey.
A private family visitation will be held, with interment in St. Michael’s Cemetery.
Memorial contributions may be made to the Activities Dept at the Carbondale Nursing and Rehab Center, 10 Hart Place, Carbondale, PA.   18407.
Arrangements are by the Joseph W. Scotchlas Funeral Home, Inc., Simpson.  For condolences visit: www.scotchlasfuneralhome.com