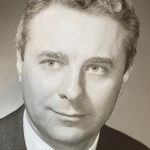 John J. Fendrock, formerly of Ridgewood NJ, died on May 3, 2020 in Burlington MA. He was 96 years old. John was born in Simpson, PA. John was the oldest son of John J. Fendrock and Cecilia (Stefanides) Fendrock, husband to his beloved wife, Lillian and loving father to John, Charles and Bernadette.

From an early age, John loved school, books and learning and he retained those interests for his entire life. Although John started his studies at the University of Scranton, he left school to serve in the Navy, trained as an Air Cadet and served in WWII as a Quartermaster, Second Class and was honorably discharged on Christmas Day, 1945.

After the war, John completed his studies at the University of Scranton where he received his Bachelor’s Degree in 1948. John was licensed as a Professional Engineer in 1955. In 1957, he received his Master’s degree from Syracuse University and earned a Doctorate of Professional Studies at Pace University in 1977.  In 1954, John and Lillian moved from Simpson, PA to New Jersey where he had a long business career working in the electronics industry, which contributed to the U.S. space program and the military.  He worked for about a decade at Avion Electronics and ultimately, was President of the company. His commitment to education led him to teach at Montclair State University and become an Adjunct Professor in the departments of Management and Business at Rutgers University.  He was a prolific reader of history and dedicated writer.  He wrote several articles for the Harvard Business Review and published seven books on the subjects of management and history.  He was last working on his autobiography. In 2011, John was a recipient of the annual Frank J. O’Hara Award from The University of Scranton for Arts and Letters.

John was disciplined in his approach to life. He was an avid runner (and then walker) logging five to eight miles, six days a week. He enjoyed the outdoors, classical music and a healthy debate.  John and Lillian were members of Our Lady of Mt. Carmel Church in Ridgewood, NJ for 60 years before moving to Massachusetts in 2018 to be closer to family.

A memorial to celebrate John’s life will be scheduled at a later date.

In lieu of flowers, please consider a memorial gift to The John J. Fendrock ’48 Scholarship, established for a first generation student from Lackawanna County, PA, payable to The University of Scranton, 800 Linden Street, Scranton, PA 18510. Contributions may also be made online by visiting: https://www.scranton.edu/advancement/form/index.shtml  At the bottom of the form please select Other and type “The John J. Fendrock ’48 Scholarship” when making your gift.