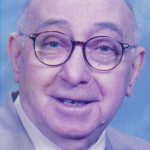 John Prebich, 96, of Mayfield died Monday at the Forest City Nursing home. His wife, the former Jennie Alampi died in 1999.

Born in Simpson, he was the son of the late Andrew and Mary Brezichko Prebich. John was a member of St. Basil’s Russian Orthodox Church, Simpson and the Russian Brotherhood Organization of the USA. He served in the Army during WWII and was a member of the Civilian Conservation Corp.

John was a coal miner for over 26 years and prior to retirement was employed by Farview State Hospital, Waymart for ten years

John was a loving and devoted father and grandfather who brought grea joy to his family and friends. In his earlier years, he enjoyed hunting , fishing and was an avid New York Yankees fan. He also enjoyed playing the harmonica and guitar.

The family would like to extend a special thank you to nurses, especially Karen Dekle who has assisted him since 2011 The aids and staff of Hospice and Home Health of Lackawanna County and Dr. Haley and staff for their time and care.

He was preceded in death by two brothers, Michael and Joseph and four sisters, Anna Mikulak, Helen Tayfun, Mary Decnik and Julie Pollick.

The funeral will be Thursday with a Requiem Service at 9:30 AM in St. Basil’s Russian Orthodox Church, 33 Midland St., Simpson by the Very Rev. Mitered Archpriest David J. Hritcko. Interment will be with military honors in Our Mother of Sorrows Cemetery, Greenfield Township.

In lieu of flowers, memorial contributions may be made to, St. Basil’s Russian Orthodox Church or VNA Hospice and Home Health of Lackawanna County, 301 Delaware Ave, Olyphant, Pa 18447.