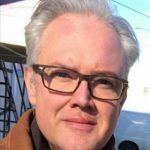 Born in Carbondale, he was the son of Mary Smith Zrowka, Simpson and the late Myron Zrowka.  Joseph was a 1981 graduate of Carbondale Area High School and a 1985 graduate of Marywood University with a bachelor’s degree in Business Administration.

Joseph had been employed as a sales manager and buyer for clothing lines in Virginia and Pennsylvania. He worked later in furniture sales and most recently had been employed by Geisinger-CMC, Scranton. He was a member of  S.S. Peter & Paul Greek Catholic Church, Simpson.

Joe had an interest in art and pursued it as a hobby and attended classes in art.

He was preceded in death by a brother in law, Jerome Brennan.

The funeral will be Tuesday with Divine Liturgy at 10:30 AM in S.S. Peter & Paul Church, 43 Rittenhouse St., Simpson to be celebrated by the Rev. Myron Myronyuk, Pastor. Interment will be in Our Mother of Sorrows Cemetery, Greenfield Township.