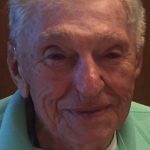 Joseph Marchuck, Jr., 97, formerly of Simpson died Tuesday morning at the home of his son in Lebanon. His wife the former Nancy Atkinson died in 2017.

Born in Simpson, he was the son of the late Joseph and Anna Mozeliak Marchuck, Sr. He was a graduate of Fell Township High School, Simpson.  Joe then served in the Army with the 824th Tank Battalion in the Pacific Theater in World War II. Upon returning home, he was an automobile mechanic working with Scotch Motors for many years, he retired from Gentex Corp., Simpson.  Joe was also a Fell Township Police Officer.

Joe was a member of Ss. Peter & Paul Greek Catholic Church, Simpson.  He was also an active member and former fire chief with the Grattan Singer Hose Co. and member of the Walter Paciga V.F.W. Post #4712, both of Simpson.

He was preceded in death by a daughter, Joelyn Mark in February and two brothers, Theodore and Harry Marchuck.

The funeral will be Friday with Liturgy at 10:00 AM in Ss. Peter & Paul Greek Catholic Church, 43 Rittenhouse St., Simpson by the Rev. Nestor Iwasiw.  Interment will be with military honors in Our Mother of Sorrows Cemetery, Greenfield Township.