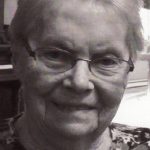 Josephine Rushen, a resident of the Forest City Nursing Home and formerly of Whites Crossing died Monday. She was the wife of the late John Rushen. They were married for 63 years before his death in 2004.

Born in Simpson, on December 4, 1921, she was the daughter of the late Anthony & Josephine Kucharski Lepkoski. Josephine was a graduate of Fell High School, Simpson and lived most of her life in Whites Crossing.   Prior to retirement, she worked at the Whites Crossing Medical Center. At one time, she was a member and an officer of the Whites Crossing Fire Company Auxiliary. She was a student and teacher of the Polish language for many years.

The family would like to thank the doctors and everyone who took care of Josephine at the Forest City Nursing Home and also everyone at Mallard Meadows Assisted Living.

She was preceded in death by two sisters, Anna Reeve and Victoria Rusiniak and five brothers, Alex, Merl and Peter Lepkoski and Stanley and Walter Valeski.

The funeral will be Friday from the Joseph W Scotchlas Funeral Home, Inc 621 Main St, Simpson with Mass of Christian Burial at 9:30 Am in St. Rose of Lima Church, 6 N. Church St, Carbondale. Interment will be in St. Michael’s Cemetery, Simpson. Friends may call Thursday from 5 to 8 PM.

For directions or condolences visit the funeral home website.