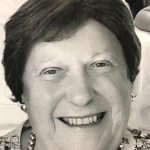 June M. Lown, 81, of Jefferson Township, died Sunday at Geisinger Hospice, Wilkes-Barre. She was the wife of Loren “Skip” Lown.  She was preceded in death by two husbands, Walter Maurer and Edward “Jim” Borosky.

Born in Madisonville, she was the daughter of the late Robert and Grace Chambers McLain. She was a graduate of Moscow High School.         June had been employed by Rita’s Fashion Sportswear, Moscow and was a driver for the North Pocono School District. After June had moved to Simpson  she became the Fell Township Tax Collector and served for over 20 years.

June was known as a great person and was loved by many and will be missed by her family and friends.

She was a member of the Eastern Star, Laurel Chapter 67, Waymart where she was a past Matron, Paciga V.F.W. Post Ladies Auxiliary, Simpson and a member of the former Fell Township Golden Age Club.

A private graveside service will be conducted by her brother in law, Rev. Ken Alt at Fairview Memorial Park, Elmhurst. Arrangements are by the Joseph W Scotchlas Funeral Home, Inc., Simpson. For condolences visit: www.scotchlasfuneralhome.com

Memorial contributions may be made to the American Cancer Society.