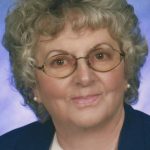 Kathryn W. Shifler,83, formerly of Carbondale died Sunday at Wayne Woodlands Manor. She was the widow of Oliver R. Shifler, who died in 2009.

Born and raised in Waymart, she was the daughter of the late Harry & Helen Curtis Wood. She was a graduate of Waymart High School.   Kay with her husband Ollie operated the Oliver Shifler Funeral Homes in Carbondale and Waymart until their retirement.

She was preceded in death by a step-daughter, Sandra Pasterchik and two brothers, Curtis and William Wood.

There will be a memorial service scheduled in the future.