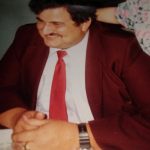 Born in Hoboken, NJ, he was the son of the late John and Madelyne Mascis. He was educated St. Peter & Paul Elementary School and a graduate of Hoboken High School. Lazzaro retired as a bus driver from the Hoboken Transit Authority.  Lazzaro was also a member of the Knights of Columbus an a Free Holder in 1982 -1983.

He was preceded in death by a brother, Martin A Mascis.