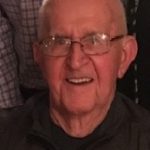 Leo was the son of the late John and Katarzyna Pokora Skorupa, he was one of nine children.  He is the husband of

Leo graduated from Fell Township School District in 1945.  Upon graduation, he joined the U.S. Army and later attended G.I. School.

Through his life he was an employee of Banner Shoes in Honesdale, his brother’s  establishment, “Chet’s Bar” in Jermyn and Telephone Engineering, where they made more practical jokes than telephone repairs.

Family was the major thing that made Leo happy.  He was proud of his four boys and their families.  Leo enjoyed picking blueberries, mushrooms, taking walks and attempting to conquer the Sunday crossword puzzle.  The Oakland A’s were the only professional sports team that he was passionate about along with being a Penn State football fan.

Throughout Leo’s life he was involved in his community.  Being part of “The Greatest Generation”, Leo served as Commander of V.F.W. Post 4712, and years as Quartermaster and member of the Honor Guard and  firing squad.  As a member of Holy Trinity Church, now St. Michael’s Church/St. Rose Parish, Leo was a member of it’s Holy Name Society and a volunteer at the annual block party.

As our churches had merged you could hear Leo yelling out the numbers on the Big Six wheel as his wife Maggie was yelling “B chicken legs 11!” at the  Bingo stand of Saint Michael’s Picnic.

The family of Leo would like to thank the staff at the Forest City Nursing home and Regional Hospital of Scranton for their compassion, care and advice throughout Leo’s care.

Since Leo’s wife, Maggie, passed way too soon from colon cancer, his family wishes, in lieu of flowers or gifts, to please get screened for this curable but deadly disease anddonate to the American Cancer Society, Carbondale YMCA, 88 N. Main St., Carbondale or the St. Rose Restoration Project, 6 N. Church St., Carbondale, PA 18407.

A private graveside service will be held at Holy Trinity Cemetery, Simpson. A Memorial Mass will be conducted at a later date.