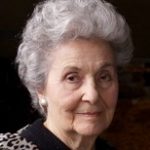 Leona “Lillian” Fendrock (Petreshock), formerly of Ridgewood NJ, died on January 6, 2021 in Bedford, MA.  She was 95 years old. Lillian was born in Simpson, PA. Lillian was the youngest child of George Petreshock and Mary (Potosne) Petreshock.  She was married for 70 years to her beloved husband, John, and was a loving mother to John, Charles, and Bernadette.

Lillian was interested in fashion design from an early age, creating and sewing her own clothes.  During WWII, she completed an engineering course at Penn State College under the Engineering, Science and Management War Training Program, which enabled her to become one of the only women drafting engineers at Gentex Textile Mills in Carbondale, PA, a manufacturer of high payload parachutes during the war.  Her life-long love of fashion and her work as a draftsperson led to her interest and approach as an oil painter.

After Lillian and her husband, John, moved to New Jersey in 1954 and started to raise their family, Lillian joined the Ridgewood Art Institute (RAI) where she was a Life Member. At RAI, she studied with Arthur Maynard, Betty Kaytes, and Joe Hing Lowe.  She also studied at the Parsons School of Design in New York City.  Lillian was a Life Member at the Art Students League in New York City where she studied with David Leffel. Lillian exhibited in many juried shows and was the recipient of multiple awards.  Lillian continued to paint into her early 90’s and said that painting was “a part of her life”.

Lillian saw beauty, art, and light through her artistic lens.  She was an industrious and delighted homemaker, creating a warm home for her family and friends.  She designed and sewed clothes throughout her life.  Lillian was a wonderful cook and was known for her special cakes and pies. She and her husband, John, traveled extensively throughout Europe, the Caribbean, and the United States. Favorite destinations included Iceland, Spain, Morocco, Russia, and the Baja.  While living in NJ, Lillian and John enjoyed many excursions with their children into New York City to enjoy shows, museums, classical music performances, and restaurants. Lillian enjoyed reading biographies about extraordinary women and listening to opera.

Lillian and John were members of Our Lady of Mt. Carmel Church in Ridgewood, NJ for 60 years before moving to Massachusetts in 2018 to be closer to family.

A memorial to celebrate Lillian’s life will be scheduled in Pennsylvania at a later date.

In lieu of flowers, please consider a memorial gift for the Lillian Fendrock Memorial Fund at the Ridgewood Art Institute, Attention: Rebecca Leer, 12 East Glen Avenue, Ridgewood, NJ 07450.  The fund will support activities such as juried show prizes, care of the permanent collection, and general needs of the Institute.

The Ridgewood Art Institute is a non-profit organization made up of professional and amateur artists who represent and perpetuate America’s heritage of traditional realism in painting and drawing. The pursuit of beauty in fine art is promoted through the Institute’s classes, exhibitions, lectures, and demonstrations, which are made available to the public.