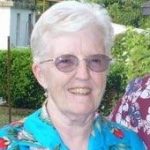 Margaret Craigmile Hartmann, 86, of Scranton died Friday at the home of her daughter. She was the widow of Rev. William C. Hartmann, who died in 2012.

Born in Aberdeen, Scotland, she was the daughter of the late Frank V. and Jeannie I. Craigmile Smith.  She was educated at Aberdeen Academy and graduated from its business school. Margaret immigrated to the United States in 1957. She worked in various companies as an executive secretary, retiring from WEA Manufacturing.  In June 2002 she became commissioned lay pastor for the First Presbyterian Church, Nicholson, retiring in June 2016. She enjoyed music, traveling and her family.