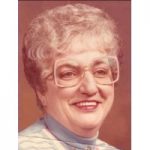 Martha Orinick Woytowich, 85, of Carteret, NJ died Monday at Rahway Hospital, Rahway, NJ. She was the widow of Michael Woytowich, who died in 1996.
Born in Simpson, she was the daughter of the late Michael & Anna Egnotovich Orinick. She attended Fell High School, Simpson and was later employed in several Carbondale Area dress factories. Martha had resided in the village of Dundaff before moving to New Jersey with her daughter.
She was a member of St John the Baptist Russian Orthodox Church, Dundaff.
She is survived by a daughter Ann Marie and husband Kevin LaRose, Carteret, NJ; a brother, Andrew Orinick, Whippany, NJ; two sisters, Irene Borick and Catherine Kowalako, both of Hazelton, nieces and nephews. She was preceded in death by a brother Michael and a sister Veronica.
The funeral will be Saturday from the Joseph W Scotchlas Funeral Home, Inc 621 Main St Simpson with a Requiem Service at 11:30 AM in St John the Baptist Russian Orthodox Church, Dundaff by the Rev. Dennis Swencki. Interment will be in St. John’s R.O. Cemetery, Dundaff.
Friends may call Saturday from 9AM until 11 AM at the funeral home.
For directions or condolences visit: www.scotchlasfuneralhome.com