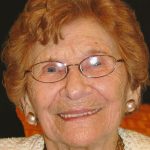 Mary Ann Propeack, 106, Simpson’s oldest resident died Monday at the Carbondale Nursing Home. She passed on what would have been her 87th wedding anniversary to the late Stephen Propeack, who died in 1971.

Mary Ann was born during  a heavy snow storm on March 5,1916. The doctor was brought to the family farm in Waymart by sleigh.  She is the last of thirteen children of Francis and Mary Sebulka Burrier. Mary Ann was a graduate of Waymart High School.

She worked her entire life, starting out at Gentex sewing panels for parachutes and creating the insides of helmets. Later, she worked in the dress factories in the Forest City, Carbondale and Simpson area. She was an active member of Holy Trinity Church, Simpson then combined with St. Michael’s now a part of St. Rose Parish.  Mary Ann could be found quilting for church raffles or making quilts for her family.  She enjoyed traveling and was the traveling coordinator with the Golden Age Club of Simpson.

Mary Ann loved her family and passing on traditions. She taught the next two generations how to make her famous pierogis.

The family would like to thank the staff at Carbondale Nursing and Rehab for their compassionate care for Mom and thoughtful support of the family.

She was preceded in death by a daughter, Wanda Maddage and a grandson, Anthony Propeack.

The funeral will be Thursday, May 5th with Mass of Christian Burial at 11:00 AM in St. Michael’s Church, 46 Midland St., Simpson to be celebrated by the Rev. Joseph S. Sitko.  Private family interment will follow in Holy Trinity Cemetery, Simpson.

In lieu of flowers a donation may be made to St. Jude’s Hospital for Children,  262 Danny Thomas Place, Memphis, TN. 38105 or to your favorite charity.+