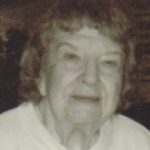 Born in Carbondale, she was the daughter of the late Russell W. and Marie Dougher Stanton. She was educated in Carbondale Public Schools.

Mary worked for Gaymor Electric Co., Stratford, CT for twenty years and was president of the Local #214, International Union of Electrical Workers for fifteen years. Upon moving back to Pennsylvania she lived in Honesdale and was employed by the shipping department of Amber Lingerie, White Mills and Sherman Underwear Co., Hawley.  After both of those factories closed she worked in McCroy’s of Honesdale until her retirement.

Mary was preceded in death by three brothers, Russell Stanton, Richard Stanton and John Bruce Stanton and a sister, Beth.

A private gravesite service will be conducted at the convenience of the family at Our Mother of Sorrows Cemetery, Greenfield Township.