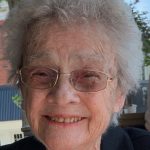 Mary “Molly” Lisowski, 94, long-time Simpson resident, died peacefully in the presence of her family, of natural causes, on July 10, 2021. She was the widow of Peter Lisowski, Sr, who died in 2001.

Born October 5, 1926, in Pleasant Mount, she was the daughter of William R. and Gertrude Meagher O’Neil.  She retained her childhood nickname, Molly, and was known by either name.  Mary was a graduate of Pleasant Mount High School, East Stroudsburg College Class of 1947, and the University of Scranton. She met her husband of 48 years, Pete, while they were both students at East Stroudsburg, following Pete’s service in the Army in World War II in Germany.  Always an organizer, while at college Mary led an informal group of women known on campus as “The Big Nine.”

Mary had a long and successful career as a teacher, like her parents and husband, for over 30 years, starting in Dallas and then Fell Township Elementary Schools, where she was a reading and math teacher. She positively influenced the lives of each of her students and colleagues, as her children always heard accolades about her from former students and fellow teachers.

Mary was a kind, compassionate, and resourceful wife, mother, aunt, teacher, neighbor, and friend. This remarkable woman made everyone she encountered feel valued and appreciated. While raising her family she made her home a “hotspot” and hangout for her children and their friends. She was an active member of Holy Trinity Church and St Michael’s Church, now St. Rose Parish. She was also an instrumental supporter of the Scouts and PTA, and a member of the Confraternity of Christian Mothers, Fell Township Golden Age Seniors, the Pennsylvania School Retirees Organization, and most recently her breakfast club, “The View.”

Mary is also survived by sister Peggy Swartz and her husband Ken, and sister-in-law Veronica Paciga.  Mary’s twin brother Dan and older brother Bill pre-deceased her. She leaves behind a bevy of nieces and nephews from the O’Neill and Lisowski families. And her faithful black cat Farley.  Mary was a strong, smart, and feisty Irish woman right up to the end.

Friends may call at the Joseph W. Scotchlas Funeral Home, 621 Main St, Simpson, on Friday, July 16th, from 4-7 pm. The funeral will be on Saturday July 17th from the Joseph W. Scotchlas Funeral Home, with Mass of Christian Burial at 11 am in St. Michael’s Church, 46 Midland St, Simpson, to be celebrated by the Rev. Seth Wasnock.  Interment will be in St Anthony’s Cemetery, Forest City.

For direction or condolences visit: www.scotchlasfuneralhome.com