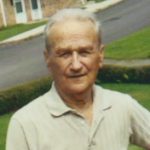 Born in Simpson, he was the son of the late Stefan & Mary Chomyk Brunarski.. He was a graduate of Fell High School, Simpson. In his youth, Mike worked at a CCC camp in New Jersey and served in the Army Air Corp during World War II.  He worked in a weaving mill in the Mid-Valley and retired from Procter & Gamble, Mehoopany after 17 years.

Michael was a member of S.S. Peter & Paul Greek Catholic Church, Simpson. He was a kind and humble man with a strong work ethic. He was devoted to his family, faith and country. He loved the outdoors.

The family is grateful for the care Mike received at the Clarks Summit Senior Living and VNA Hospice at Geisinger CMC.

He was preceded in death by two brothers Joseph & Metro and two sisters Anna Mycek and Julie Kulenich.

The funeral will be Saturday at 10:00 AM in the Joseph W Scotchlas Funeral Home, Inc 621 Main St., Simpson with a Panikhida Service by the Rev. Myron Myronyuk, Pastor of S.S. Peter & Paul Church. Interment will be in Mother of Sorrows Cemetery, Greenfield Township.  Friends may call Saturday from 9 to 10 AM.