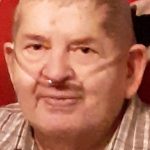 Mike was born on January 3, 1939, the son of the late John and Mary Dzurine Kresock. He was the last of five boys born to the Kresock’s. He was also the last to follow them in death. They were John, Joseph, Frank and Stephen.

He attended Simpson schools and graduated from Fell High School in 1956.   He graduated with an associate degree in Accounting from Lackawanna Junior College in 1959.. He was hired by Hendrick Manufacturing, Carbondale, on September 1, 1959. He retired on May 31, 2006 and was very proud of his 47 year association with Hendrick Manufacturing.

Mike was married to Shirley Jane Armstrong of Vandling, on September 3, 1966.  Shirley passed away on October 3, 1998, after a two year battle with brain cancer. During their marriage Mike and Shirley also operated Kresock’s Café, Simpson.

The Kresock’s became friends of John “ Trigger” Thomas and his wife Shirley. “Trigger” died in 1990.  Mike and Shirley Thomas continued their friendship and in 2001, Shirley moved into his home. Shirley was a true friend and companion.

The family would like to thank the staff of Allied Skilled Nursing and Moses Taylor Hospital for their exceptional compassionate care.

Mike wanted to thank two of his best friends, John Gombita and Dale Jennings. John and Dale were always there when Mike needed something and that was quite often. Mike also wanted to thank Diane Kurtz for the friendship and care that she gave to Shirley Thomas and Mike for quite a few years.

The funeral will be Saturday with service at 2:00 PM in the First United Methodist Church, 20 North Church St., Carbondale by the Rev. Donald Perry, Pastor. The family will receive friends from 1:00 PM.

Spring interment will be in Rounds Cemetery, Union Dale. In lieu of flowers, memorial contributions may be made to the First United Methodist Church.