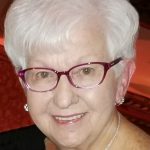 Patricia A. Burnett, 83, of Eynon and formerly of Simpson died Friday at Hospice of the Sacred Heart, Dunmore. Her husband, Paul Burnett, died, May 2019.

Born in Simpson, she was the daughter of the late Joseph and Helen Voinski Wilk. She was a graduate of Fell High School, Simpson. Pat worked as office manager of Burnett Casket Co. and retired from CVS as a Pharmacy Technician.

She was also preceded in death by a brother, Ambrose Wilk and two sisters Nina Budwell and Florence Prota.

A Memorial Mass will be conducted at a later date. A private interment service will be at Our Mother of Sorrows cemetery, Greenfield Township.

Memorial contributions may be made to Hospice of the Sacred Heart, 100 Williams St., Dunmore, Pa 18512