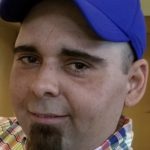 Paul J. Verkitus, 33, of Archbald passed away on Tuesday at Geisinger Medical Center, Danville, after a short illness.

He was the son of Suzanne Golden Verkitus and Peter Verkitus, Archbald. Paul worked hard as an employee of Leeward Construction. His co-workers would often tease him about his extra-large hands and feet, but they were no comparison to his big loving heart. Paul loved riding his quad up the country and his many hours target shooting. He cherished his visits to the Jessup Sidebar, where he made many wonderful friends.

Paul’s passing will leave a huge void on his family and many friends who truly loved him. Please speak his name often, tell the many stories and great memories and they will keep him forever in our hearts.

There will be no viewing. A Celebration of Paul’s Life will be held at a later date. Arrangements by the Joseph W Scotchlas Funeral Home, Inc., Simpson.