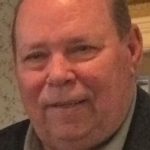 Raymond ‘Ray’ W. Ledward, Jr., 74, of Union Dale and formerly of West Caldwell, New Jersey died Saturday at home. Survived by his wife of 46 years, Donna Dorer Ledward. He was a loving husband and proud father and grandfather that was adored by all and will be deeply missed.

Born in Paterson, NJ, he was the son of the late Raymond W. and Elizabeth Kuzmack Ledward, Sr. He was a graduate of James Caldwell High School Class of 1961.

Raymond’s higher education started at the Teterboro School of Aeronautics and continued training in the United States Air Force. After his service, he continued his education achieving an Associate in Science Degree from the County College of Morris, Bachelor of Science in Public Safety and a Triple Masters of Arts in Criminal Research and Planning, Community Affairs, and Urban Education all from William Paterson College.

He served in the United Stated Air Force enlisting in 1964 training in the aircraft mechanic field. He is a veteran of the Vietnam War, where he earned several medals, including the Presidential Unit Citation and Presidential Personal Citation each with two oak leaf clusters, Good Conduct and Vietnamese Medal and a Bronze Star. He served in the Army National Guard at the Picatinny Arsenal in New Jersey from 1989 to 1991.

Raymond retired in rank of Sergeant in 1994 after 26 years with the Fairfield Police Department, Fairfield, NJ. During his employment he served as patrolman, detective and greatly enjoyed being the firearms instructor for the Department for over 14 years which was given the name Fort Ledward. He received two citations for valor in the line of duty in addition to numerous awards. He was known to speak his mind and enjoyed serving alongside his fellow officers. He served as Court Security Officer at the Federal Courthouse in Scranton, until his retirement.

He was a member of the Flying Tigers and Eagle Scout. He enjoyed his involvement with Boy Scout Troup 9 in West Caldwell, New Jersey and Troup 407 in Pleasant Mount, PA with his sons until they earned the rank of Eagle Scout. He enjoyed working on cars and spending time in the garage. He loved laughing with family and creating the memories that we continue to share. He enjoyed hunting, camping and fishing with the kids.

The family would like to thank Dr. Neal Davis and his staff and the staff of the Wilkes-Barre Veterans Administration Hospital for their care of Raymond.

Funeral services with military honors will be at the convenience of the family from the Joseph W Scotchlas Funeral Home, Inc. 621 Main St., Simpson with Pastor Wayne Wolfe.

In lieu of flowers, memorial contributions may be made to the charity of your choice.