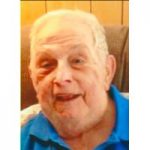 Robert Pfiffer, 91, of Carbondale died Wednesday at home. His wife the former Kathryn McWilliams died in 1996.
Born in Jersey City, NJ; he was the son of the late Joseph & Mary Mabel JohnsonPfeiffer. He served in the Army during World War II in the Battle of the Bulge and earned a Purple Heart. Bob then was employed by Western Electric Co. / A.T. & T. until his retirement.
He was a member of the First Presbyterian Church, Carbondale.
He is survived by several nieces and nephews and his caregiver, Roseanne Scarfalloto. He was preceded in death by two brothers, Rene & Charles and a sister Mabel Pfeiffer and his faithful companion Moe.
Per Robert’s request, he will be cremated and buried at Dale Cemetery, Ossining, NY.
Memorial contributions may be made to the First Presbyterian Church or the Y.M.C. A., both of Carbondale. Arrangements by the Oliver Shifler & Scotchlas Funeral Home, Inc. , Carbondale.