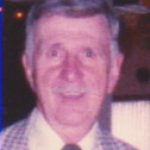 Born in Simpson, he was the son of the late Stephen J and Mary Gitch Gallick.  He was a graduate of Fell High School, Simpson and served in the Navy during World War II. He retired from Farview State Hospital, Waymart.

Stephen was a Free Mason, past president of the Lions Club, Camden, New Jersey, past president of Tri- County Sportsmen Club, Simpson and a member of the American Legion Post #221, Carbondale.  He was an avid hunter, fisherman and enjoyed gardening.

He was preceded in death by a sister, Mary A. Gallick, a brother, baby William and a granddaughter, Laura Mayer.

A graveside service will be held on Wednesday at 10:00 AM in Holy Trinity Cemetery, Fulton St., Simpson by Pastor Richard Miller. Military services will be by V.F.W. Post #4712, Simpson.   There will be a private family visitation.