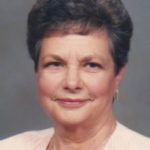 Thelma J. Pierce Gardner Keen passed away peacefully Saturday morning, December 28th. The daughter of Raymond and Lottie Pierce, Thelma was born on a warm June day in 1929. She was a 1947 graduate of Benjamin Franklin High School, Carbondale and a lifelong member of the Finch Hill Baptist Church.

Thelma’s life began in hardship when she lost her mother at 13 months old. In the absence of her mother, Thelma was raised by a father who loved her fiercely and by “Grandma Bellamy”, the beautiful soul who stepped into her life offering compassion, love and patience. She met the love of her life, Maurice Gardner, at the tender age of 7. As high school sweethearts, she and Maurice were nearly inseparable and married in 1948. Shortly after, Thelma gave birth to her first son, Bruce Wayne and five years later, to her second, Gary Maurice. Thelma gave every ounce of her passion and purpose to her family, ensuring their stomachs and hearts were always full.

Thelma was widowed at just 59 years of age when her Maurice was called home to be with the Lord in February 1988. As is the case when a marriage has been so beautiful and offered so many blessings, Thelma sought to remarry and found room to love again with George “Pete” Keen. As Thelma – or to her grandchildren, Grandma TJ – often said, Pete’s love and friendship saved her during a time when happiness seemed a distant memory. They shared years of adventure and companionship that was treasured by far more than they alone but for the second time in her life, Thelma was widowed upon Pete’s passing in January 2018. Of this we are sure, Thelma had immeasurable love waiting for her in heaven.

Thelma was preceded in death her son, Gary Gardner; and sister, Tressa Rose Pierce. It was an incredible day in Heaven when Thelma stood in the presence of her Creator and found her mother waiting to hold her, just as she is now holding her own child once more.

Thelma’s family would like to sincerely thank the staff of the Forest City Nursing & Rehabilitation Center for the compassionate and diligent care they gave her in the final year of her life.

A Funeral Service will take place at the Finch Hill Baptist Church, 404 Route 106 Greenfield Township, on Tuesday, December 31sth at 10:00 AM. Services will be conducted by Pastor John May, and friends may call on the family from 9:00 to 10:00 AM. Interment will be in Sandy Banks Cemetery, Greenfield Township.  In lieu of flowers, donations may be made to the Finch Hill Baptist Church.