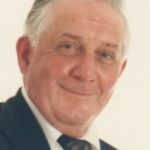 Thomas L. Golecki, 85, of Simpson passed into his Father’s Hands early Monday at the Carbondale Nursing Center. His wife is the former Mary Lou Petak.

Born in Forest City and a graduate of Forest City High School Tom became a helicopter mechanic in the Army. After returning home, he was employed by Top Value Stamp and Giant Markets. He ended his career as a security aid at Farview State Hospital, Waymart.

Tom was a “jack of all trades”. He was a mechanic, electrician, plumber and carpenter or whatever he had to be. A trait he handed down to his sons.

He was preceded in death by three sisters, Helen, Eleanor and Pearl and three brothers Frank, Leo and Joseph C. Golecki.

The funeral will be Thursday from the Joseph W Scotchlas Funeral Home, Inc 621 Main St., Simpson with Mass of Christian Burial at 10:00 AM in St. Joseph’s Church/ Ascension Parish, 741 Delaware St., Forest City. Entombment will be in Our Mother of Sorrows Cemetery, Finch Hill.  The visitation will be private.