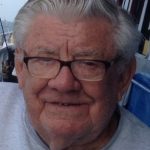 Born in Simpson, he was the son of the late John and Celia Kusiniska Tomcikosky. He attended Fell Township School and was a Navy veteran serving on the USS Dyess. Val operated his own bakery in Ridgewood, NY. Additionally, he was employed by several hotels in Monticello, New York and local summer camps until his retirement 25 years ago.

He was a member of St Michael’s Church/ St Rose Parish, Simpson.

Val was an avid Yankee fan and enjoyed many spring training games in Tampa, Florida. Fishing was also a great passion as was watching the Giants play football.

He was preceded in death by a sister, Sophie Decknick and brothers, Stephen, Anthony and Raymond.

Interment was private at Mt Carmel Cemetery, Carbondale. A Memorial Mass will be held at a later date.