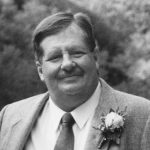 Born in New Haven, CT, he was the son of the late Harry & Anne Lawlor Falkoff. He was a graduate of Brandford High School and Salem College, W.V.    Walter, affectionately known as the “cod father” was a professional fly fisherman guide working in Montana, Wyoming and the Hudson Valley of New York.  More recently he had been employed as an executive chef.

Walter had a love for being in the outdoors and also enjoyed hunting, deep sea fishing, and crabbing. He was a varsity athlete in high school playing football and track and field where he set school records as a javelin thrower.

He is also survived by a brother, Ray Falkoff and wife Christy and their children Patrick and Kathrine and a sister, Judy Mercer-Falkoff and husband Bob and their daughter, Aleagia, all of Brandford, CT. Walter was fond of his golden retrievers, Laddie, Angel, Froto and Willow.