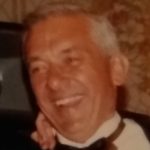 Bill Fendrock, 83, of Carbondale, died peacefully at home in his sleep after battling Parkinson’s disease and related dementia.

Born in Simpson, youngest son of John J. Fendrock and Cecilia (Stefanides) Fendrock, Bill started his work life at nine years old, after the death of his father. He was a lifelong learner who earned hundreds of college credits, but decided to forgo any formal curriculum toward a degree. He also served in the U.S. Army.

Bill enjoyed poetry, was confounded by black holes of the universe, spontaneously belted happy songs, and liked a good laugh as much as a good Manhattan. He often said that his family was his greatest asset, and they remain humbled by that.

Bill was preceded in death by his parents, as well siblings and their spouses, and a niece: Cecelia (Fendrock) and Andrew Zurine; Rose (Fendrock) and Valentine Sarnoski; Augustine Fendrock; William Lambert; and Suzanne (Sarnoski) Bilow.

Bill will be honored during a casual visitation at Joseph W.Scotchlas Funeral Home, Inc., 621 Main Street, Simpson, on Saturday 10:00 AM-12:00 PM, with a memorial service at noon followed by military honors. A family gathering to celebrate Bill’s life will be scheduled for the summer of 2020.

In lieu of flowers, memorials, or gifts, please honor Bill’s legacy by making a donation to AseraCare Hospice or your favorite charity, or having a drink or a coffee with an old friend. Or simply belt out a happy song for no reason – he probably would have liked that one the most.