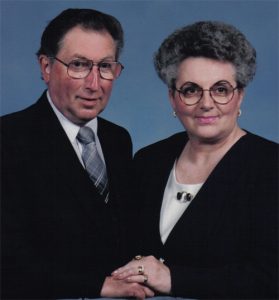 In 1939, Oliver H. and his wife Florence Reynolds Shifler moved the funeral home to its location at 94 North Main Street, on scenic Route 6. They had two sons: Robert J. and Oliver R. Shifler. Starting in the 1940’s the Shifler family operated a livery service to many area funeral homes and also maintained ambulance service for Carbondale. In addition to being active in the Carbondale community the family had a summer home in Elkdale, Clifford Township.

In 1970, Oliver R. Shifler purchased the funeral business from his dad. This continued as the third generation of the Shifler family to serve families in the greater Carbondale Area. Oliver R. and his wife, the former Kathryn Wood; continued the funeral home operation and also owned a funeral home in Waymart, Pa from 1960 until 1980.

In the fall of 1998 the business was incorporated with Joseph W. & Alice Scotchlas. Oliver R. Shifler continued as funeral home supervisor. The facilities were remodeled on both the interior and exterior.

In 2007, the property at 94 N. Main St. was sold to the Carbondale YMCA as part of their expansion project. In June of that same year we moved into our new location at 62 North Main Street. This is the former McGranaghan- Reilly building and has been used as a funeral home since the 1930’s. The entire structure was remodeled to meet current building codes. Visitation rooms , lounge and rest room were enlarged and received a face lift..  A ramp in the rear of the building allows better access from the parking lots.   In 2008, a five car garage behind the funeral home was raised and now allows for additional off street parking.

In February 2009, Oliver R. Shifler passed away only six months into his Florida retirement. That year the name was changed to Oliver Shifler & Scotchlas Funeral Home, Inc.  Alice Scotchlas is the funeral supervisor and one of a few female funeral directors in Lackawanna County.