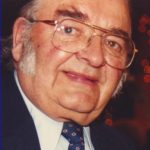 Born in Simpson, he was the son of the late George and Mary (Risboskin) Zurine. He was educated in Fell Township schools and served in the Army Air Corps during World War II.

Andrew owned Zurine’s Music Store, Simpson, from where he offered instrumental lessons. He was formerly a member of Holy Trinity Church, and more recently, St. Michael’s Church/St. Rose of Lima Parish, Simpson. He was also a member of the Holy Name Society. His lifetime passion for music brought joy to many through his accordion and piano playing – and birthday phone calls that featured his singing.

He is survived by sisters-in-law, brothers-in-law, nieces, and nephews of the Zurine, Fendrock, Sisko, Lambert, and Sarnoski families.

He was preceded in death by four brothers — George, John, Joseph, and Michael Zurine — and four sisters — Ann, Mary, and Elizabeth Zurine, and Catherine (Zurine) Sisko.

In lieu of flowers, memorial contributions may be made to St Joseph’s Center, 2010 Adams Ave., Scranton, Pa 18509.