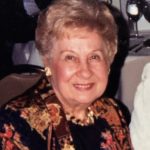 Ann “Honchie” Connolly (nee Zrowka) was born in Simpson, PA on August 26, 1928 and passed away on December 19, 2021, at the age of 93.  She is survived by her sister, Stella Obzud, of Simpson.  Ann is also survived by her sons, Kevin, of Simpson, who cared for her daily during the final decade of her life, John and his wife Janis of League City, TX,  and 3 grandchildren and 5 great-grandchildren.  She was preceded in death by her parents, Hnatko and Paraska (Kuzmiak) Zrowka, brothers Michael, Walter, Stephen, Paul, Myron, Peter, and Donald Zrowka, and sisters Mary Zrowka and Olga Wowk.  Her twin brother John died at birth.

Ann lived peacefully in Simpson for all her 93 years, residing in the same square mile her entire lifetime.  She lived a small-town life full of friends and family and was content with the simple things.  She graduated in 1946 from Fell High School where she was a cheerleader, and quick to regale anyone with the excitement of the school’s 1946 state basketball championship.  She worked as a waitress and hostess at various resorts in the Catskill mountains during the 1950’s, before attending beauty school and becoming one of Simpson’s hairdressers for 25 years.  Ann was active in the church and community, singing in the Sts. Peter and Paul church choir, serving as Cub Scout den mother, as local PTA president and as a member of the BPW women’s business club.  Devoutly religious, Ann prayed her rosary every evening.  She enjoyed golfing for many years, and in her golden years became an avid fan of televised golf tournaments.

Ann married Paul Connolly in 1965 and spent six wonderful years together before his death in 1971.  Paul was the love of her life, and together they would frequent local restaurants and clubs from the Catskills to the Poconos.  Family trips in the convertible Ford Galaxie 500 were legendary.

Ann was always smiling, she laughed easily, and talked too much.  She was not a great singer.

Ann resided on Obzud Lane for her last years – a street named after her brother-in-law Fritz Obzud.  Her quaint apartment was her refuge where home caregivers looked after her daily.  She passed away at home with her son Kevin beside her, two blocks from the house she was born in, and a short walk from her church.

Divine Liturgy will be celebrated at Sts. Peter and Paul Greek Catholic Church, 43 Rittenhouse St., Simpson at 10:30am on Thursday, December 23, 2021 by the Rev. Myron Myronyuk. The family will receive guests at the church beginning at 10 am.  A private burial will follow at Our Mother of Sorrows Cemetery, Finch Hill.