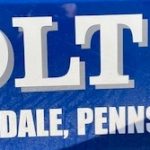 Arthur C. Wiggins, 87, of Carbondale died Saturday morning at home. His wife is the former Bette S. Dilley. The couple had been married for 65 years.

Born in Scranton, he was the son of the late Arthur C. and Marguerite Holt Wiggins Sr.  He was a graduate of Benjamin Franklin High School. Arthur was the president of Holt Lumber Co., Carbondale where he dedicated his entire life to the lumber yard and his customers.

He was preceded in death by a daughter, Deborah Wiggins and a brother, Joseph Wiggins.

A private funeral service was conducted and interment followed in Rounds Cemetery, Uniondale.