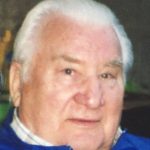 Bernard B. “ Gazda” Burnett, 91, of Simpson died Monday at home.

Born in Simpson, he was the son of the late George & Mary Fendrock Burnett. He attended Fell Township Schools and was a Navy veteran of WW II.  He owned and operated B & B Casket Hardware Co., Dickson City.

He was a life member of the V.F.W Post # 4712, Simpson and Carbondale Chapter # 98 of the D.A.V. Bernard was a manager and trustee of the V.F.W. Post in Simpson. In addition, to being a hardworking man he loved spending time at Elk Lake with family and friends sitting around the fire and singing old songs. He spent many hours in his boat enjoying his passion for fishing.

The funeral will be Saturday with Mass of Christian Burial at 9:30 AM in St. Michael’s Church, 46 Midland St., Simpson. Interment with military honors at Indiantown Gap National Cemetery, Annville, PA  The family will receive friends from 9 Am until mass time.