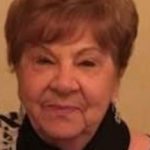 Born in Whites Crossing, she was the daughter of the late Patrick Sr and Catherine Latka Surace. She was a graduate of Fell High School, Simpson.  Catherine had been employed by Daystrom, Inc., Eynon and was a homemaker to her family and caretaker for her parents.  Catherine enjoyed her trips to Atlantic City and ceramic classes.

She was preceded in death by a brother, Dominic Surace, a sister, Marion Duffy and a niece, Darlene Duffy Surace.

The funeral will be private for the family from the Joseph W Scotchlas Funeral Home, Inc., Simpson with services by the Rev. Jack Munley. Interment will follow in Canaan Corners Cemetery, Waymart.