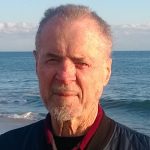 David Warner, 85, of Nanjemoy, surrounded by love went home to be with his Savior and Lord on Saturday, January 21st . 2017.

Born in Manchester, N.H., on January 7, 1932, he was the son of the late William & Dorothy Cate Warner. David served in the Marines during the Korean War.  In later years, he received instruction at the Pine Crest Bible Training Center, Salisbury, N.Y., which is where he also met his wife, with whom he celebrated 40 years of marriage.

David enjoyed sports and was a self-employed carpenter. He was involved in ministry and was a man of prayer. He volunteered time at the Parousia Ministries, the Bethesda Mission and the Teen Challenge. David participated in missions to Kenyan, Mozambique, Zimbabwe, Ghana, Panama, Mexico and the Ukraine.  Known as “Singing Dave”, he was also active in prison ministries.

A private service will be held at a later date at a family cemetery near Carbondale PA.