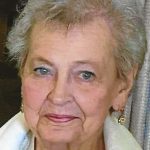 Irene E. Fry, 82, of Carbondale died Monday evening at the Wayne Woodlands Manor, Waymart. She was the widow of John “Bob” Fry,  her husband of 58 years ,who died in 2015.

Born in Simpson, she was the daughter of the late Peter and Mary Houser Swinarski. Irene was a 1951 graduate of Fell High School, Simpson.  She held several secretarial positions throughout her life, but found the most joy in her job as a teacher’s aid for the Carbondale Area School District.

Irene was involved as a Judge of Elections for Lackawanna County, a member and past president of the Carbondale Area P.T.A., a member of the Carbondale Booster Club. In her spare time she could be found gardening, wreath making, bowling, Face Timing and Candy Crushing and listening to Elvis Presley. She was at one time an Oakland Raiders fan, but eventually she did see the light and became a Pittsburgh Steelers fan.

The family would like to thank the staff at Aventura Skilled Nursing and the staff at Wayne Woodlands Manor especially Ashley, Dawn, Tracy and Beverly.

She was preceded in death by a son, James Richard Fry and brothers, Peter Swinarski, Joseph, Steve, Frank and Peter Kohut.

A Prayer Service will be held on Saturday at 7:00 PM, in the Joseph W. Scotchlas Funeral Home, Inc., 621 Main St., Simpson by the Rev. Edward Casey. Interment will be private for the family in Canaan Corners Cemetery, Waymart.

Friends may call Saturday 5 to 7 PM.   In lieu of flowers, memorial contributions may be made to: St. Jude’s Children’s Hospital, 262 Danny Thomas Place, Memphis, TN. 38105.